One potential consequence of combined effects is an increased risk of developing lung cancer. 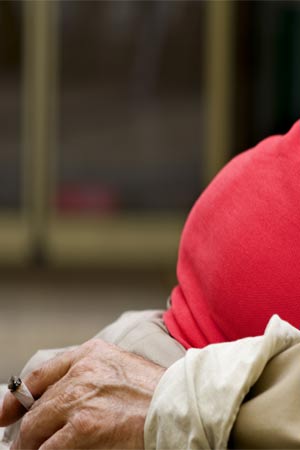 A new research suggests that cigarette smoking by obese people may pose a triple health threat in addition to the increased risks for heart disease, cancer and diabetes.

Researchers at the Pacific Northwest National Laboratory in Richland, Wash., decided to take a first step toward determining the combined effects of both cigarette smoke and obesity.

Their experiments analyzed the activity of a key family of enzymes in liver and lung tissues obtained from lean and obese mice exposed directly to cigarette smoke and second-hand smoke. These cytochrome P450 enzymes (also known as "P450s") metabolize, or break down, about 75 percent of all prescription and non-prescription drugs, and other ingested substances.

The researchers studied how P450 enzymes work in liver and lung tissues from groups of mice that were obese or normal weight, and exposed to cigarette smoke, second-hand smoke, or not exposed to cigarette smoke. They suggested that the dangerous combination impacts key mechanisms by which both the lung and liver perform metabolism. The tobacco smoke and obesity also intensifies the cancer-causing potential of cigarette smoke and asserted that they were surprised to find that in some instances, the substances in second-hand smoke seem to have a more dramatic effect than just smoking.

One potential consequence of these combined effects is an increased risk of developing lung cancer.  They found that the substances in cigarette smoke become carcinogenic when the P450s break them down. Obesity alters the lung P450s, potentially adding to the cancer-causing effects of the smoke.