Researchers have found that signs of autism can be detected in a baby as young as 6 months old. It is done through diffusion tensor imagining, a type of MRI. 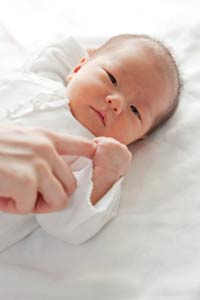 A new study has found that babies as young as six months can show early signs of autism. About 24,000 newborns, every year, are identified as autistic. This new study is constructive to decide the future treatments, which could be given to the autistic child to reduce the impact of this developmental disorder.

A study was carried out by the researchers at University of North Carolina to look at the brain development in early age. It was found that pathways of white matter connecting different brain regions did not have normal formation rate in babies, who had possibilities of developing autism, later in life as compared with the normal babies. According to Jason Wolff (a study researcher), wiring of brain was changing in a dampened way. He further added that autism does not appear quickly, but develops over time during infancy. Brain of infants with no chances of developing autism had swift formation of white matter tracts and their brains were developing in a rapid fashion.

The study involved 92 infants, which were diagnosed at the age of 6 months, one year and second year. It was carried out on infants with an autistic older sibling as they have higher risk of developing autism. Diffusion tensor imagining, a brain scan was done to analyse brain development over a period. When the babies turned two, out of 92, 28 were diagnosed with autism and 64 had normal brain development. Early scans of the 28 kids were analysed again and it was found that they had different pathways that connected brain regions to each other. Wolff emphasised that autism is a “whole-brain phenomena” and this finding will help the researchers in better understanding of how autism develops in brain.

It was suggested in findings, published in American Journal of Psychiatry, that during first year after birth, there are chances of treating diagnosed autism or reduce its impact on a child. There are good numbers of possibilities to improve the autism impact if it is diagnosed at a young age.