Donate Blood Now on the Go

The National AIDS Control Organisation has been presented with a mobile blood bank that is traversing different areas of the state of Karnataka.

The National AIDS Control Organisation has been presented with a mobile blood bank that is traversing different areas of the state of Karnataka facilitating blood banks to collect blood from interested donors. 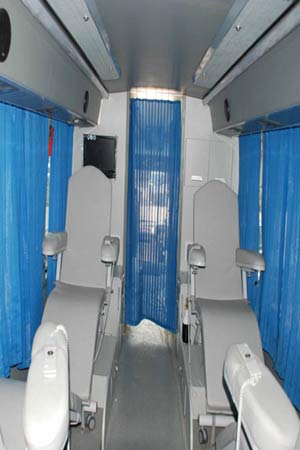 The bus, which is called, Blood Mobile, has been running in Mysore since the last week and has been visiting different places across the district where blood donation camps have been conducted. Blood Mobile is a hi-tech bus that is equipped with essential facilities, such as refrigerators to store the blood.
NACO presented the bus to the state a year ago as a part of its efforts to spread awareness about blood donation for saving lives. The blood that is collected from donors in camps is later deposited in local blood bands that are run by the government. A minimum of four people can donate blood simultaneously inside the bus. The refrigerator inside the bus stores energy drinks for the donors and also has television sets around the couches.

The bus also has public address system to allow the staff to make announcements about blood donation when it is still on the move. There is a large display screen outside the bus to allow onlookers and passersby to get all the required information about blood donation. There is also a provision to display posters at the front of the bus with details on who is eligible to donate.

The bus is operated by Karnataka State AIDS Prevention Society. This organisation is allowed to take buses for blood donation camps that are organized by the Health Department or government blood bands or others on special request.