You have a Mental Disorder if you Bite Nails

Biting nails is not just a habit anymore. It is a fully fledged mental disorder. According to the experts, nail biting, a common nervous habit is officially a result of obsessive compulsive disorder. 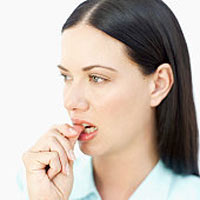 Nail biting is probably the second in kin to any other pet peeve that those who do not practice may have. Although, it is perceived as a mere habit, experts opine that it will soon be known as a sign of a full-fledged obsessive compulsive disorder.

The experts add that over millions of people worldwide often have a painful addiction to biting nails, which can in fact, be harder to quit as compared with smoking cigarettes and should not, therefore be classified as a benign habit.

Some of the most common habits linked to OCD include repetitive hair-pulling, hand-washing, etc. OCD is characteristic of unreasonable fears and thought that lead one to repeat behaviours. According to Carol Mathews, Psychiatrist at the University of California, San Francisco says that biting one’s nails becomes a disorder when it is distressing and meets a particular level of severity. The American Psychiatric Association is going to designate it to obsessive compulsive disorder in its upcoming issue of Diagnostic and statistical Manual of Mental Disorders.