What are the Causes of Bronchiectasis?

Bronchiectasis Causes and Risks- Underlying conditions such as cystic fibrosis, immunodeficiency disorders, AIDS and allergic bronchopulmonary aspergillosis are the common causes of bronchiectasis. 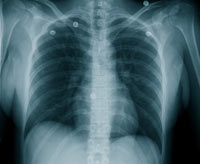 Bronchiectasis is a chronic lung disease in which airways are damaged that causes them to widen, become flabby and scarred. Injury to lung can be caused due to infection or any other condition which causes injury to the walls of the airways or prevents clearing of mucus from the airways. Read to know some of the causes of bronchiectasis.

Injury or damage to the wall of the airways can be caused due to lung infection, such as pneumonia, measles, whooping cough, TB (tuberculosis), or a fungal infection. Whooping cough and measles are the common childhood infections, which can lead to bronchiectasis, but with the use of vaccines and appropriate treatment the risk of bronchiectasis due to these infections has decreased.

Many people with bronchiectasis have an underlying condition (such as cystic fibrosis, immunodeficiency disorders, AIDS, allergic bronchopulmonary aspergillosis, primary ciliary dyskinesia) that damages the airways and increases the risk of lung infections.

It is caused due to problem in lung formation in the unborn baby (baby in the womb) so the patient is born with it. It usually affects infants and children.