Types of Asthma Inhalers for Kids

Various kinds of asthma inhalers for young children are available in the market. The lack of knowledge about each will, however, put you into a flux. 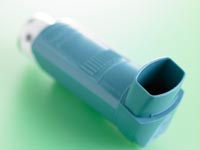 For the treatment of asthma, doctors prescribe inhalers depending on the type of asthma the child has.  For short-term relief, rescue inhalers such as albuterol and atrovent are used and inhalers such as cromolyn and inhaled corticosteroids are used for preventing asthma episodes for long term. Your child's bronchodilator may contain medications such as terbutaline, levalbuterol or budesonide. Read on to know about the various inhalers for your asthmatic kids.

Albuterol is a rescue bronchodilator inhaler used to relieve chronic signs of asthma. By relaxing the muscles around the air passages, Albuterol widens the bronchial airways thus, increasing airflow to the lungs. The increased airflow to the lungs prevents the occurrence of acute asthma symptoms such as coughing, wheezing, fatigue and shortness of breath. Albuterol is given in a prescribed dose inhaler such as ProAir or Ventolin HFA. This inhaler starts working within 15 minutes and can be effective up to 6 hours. Albuterol also causes few side effects such as restlessness, irritability and nervousness.

Cromolyn is an effective preventative drug used for the treatment of asthma in children. Cromolyn is a mast cell stabilizer that contains low dose of inhaled glucocorticoid, which controls attacks of asthma caused by foreign factors. Foreign factors such as dust and pollution cause an allergic reaction, which results in the release of histamine by mast cells. This follows the narrowing of lungs. Cromolyn functions by preventing the release of histamine from mast cells, thereby saving your kid from an asthma attack. Doctors do prescribe cromolyn in an inhaler and the usual dosage is two puffs thrice in a day.

Inhaled Corticosteroids are used to relieve inflammation in the air passages and minimise their swelling and tightening. Doctor may prescribe Inhaled Corticosteroids containing one of several medications including triamcinolone, ciclesonide, budesonide or beclomethasone. These types of inhalers are known to provide long-term relief and can be used daily without any problem and complication.

Before purchasing any inhaler for your child, make sure you have consulted his doctor.

Symptoms of Asthma in Infants