Know what is growing on your skin, they are called moles and can be of the damgerous kind. Understand all about them. 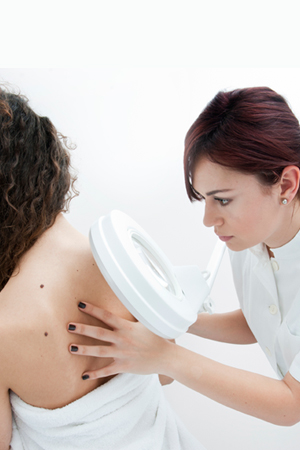 There are skin lesions that are common and non cancerous or benign as we call in other words. These conditions include moles, freckles, skin tags, benign lentigines and seborrheic keratoses. Moles that grow on human skin are either brown or black and can usually appear anywhere on the skin, either alone or in groups. Moles have been found to appear in early childhood, usually during the first 30 years of a person’s life, it is pretty normal to have 10-40 moles by adulthood. The moles they usually change slowly and become raised or changes colour. You will often find hair developed on the mole, and while some moles do not change at all, others will disappear slowly over time.

The skin moles are known as nevi and can commonly occur in many parts of the body. There are two types of moles that are likely to present problems later in life, namely congenital nevi and dysplastic nevi. The former nevi are moles that are usually present at birth and occur in about one in a 100 people. It is likely that these moles may develop into melanoma than the ones that occur at birth, so you must watch out for important changes.
The dysplastic nevi or atypical moles are those ones which are larger compared to the average moles with irregular shape. These ones have dark brown centres and lighter edges; they may also have reddish border or small black dots around its edges. It is important that your moles are recognized correctly so as to make sure that they are not cancerous.

Melanin is the natural pigment that gives your skin, hair and irises of the eye their colour. It is produced in the cells called melanocytes which are located in the two upper layers of the skin. When melanocytes don’t distribute evenly and grows in clusters instead, the moles are formed. Moles can form anywhere on the body and they tend to grow more often on those areas that are exposed frequently to the sun. These body parts can be the hands, arms, chest, neck and face.
The moles as we have mentioned earlier form in the first 30 years of the person’s life, and may grow later in life. There can be some moles especially the dysplastic ones which are considered to be influenced by genetics. The dysplastic moles are a common occurrence in people and it should not concern you much. Moles evolve over a person’s lifetime and may in some cases come with some problems.

You will not need to treat most moles, but if your doctor determines that the mole is suspicious then he or she will conduct a tissue test to determine if it is cancerous.

If your mole proves to be cancerous in nature then your doctor will have to remove the entire thing and a margin of the normal tissue around it too, surgically.

• Surgical Excision – In this method the doctor cuts the mole and the surrounding margin of the skin with a scalpel or a sharp device, and then sutures are used to close the skin.

• Surgical Shave – Often used for smaller moles, the doctor numbs the area around the mole and uses a blade to cut around and beneath the mole. If a mole has recurred then you must visit your doctor, and be careful to see if there is a mole in your beard. Moles at other body parts which are vulnerable to friction should also be removed.

You could try to conceal your moles if you are self conscious.

• Makeup – Having an unattractive mole can cause you to be self conscious and so you can cover that up with makeup. Use makeup that is designed to conceal blemishes and moles.

• Hair Removal – You may have hair growing out of your mole, and this time you will have a difficult clipping. You can permanently remove the hair and the mole, visit a dermatologist.

If in case you have cut or disturbed a mole then you must keep that part clean and visit a doctor at the earliest.