Process of Conception to Birth

From conception to birth, myriad changes take place in a baby’s transformation from being an ovum fused with a sperm to being a full-term baby. Learn more about these myriad changes.

The female body’s ability to conceive and develop a baby has been eulogised as a miracle by many. It does seem to be miraculous that a sperm and egg can fuse together inside a person to finally come out as a different person with distinct traits and personality. 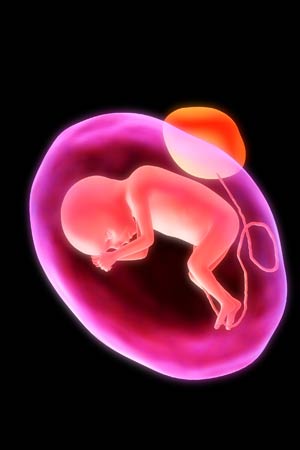 The process of conception to birth comes about through a myriad of transformations that the developing baby goes through in the mother’s womb.

Fertilisation : During sexual intercourse, sperms are released. When ejaculating, the semen encases the sperms to protect it and propel forward. Sperm goes through the vagina, enters the cervix and while going through the uterus, it reaches the fallopian tube of the woman. In a single ejaculation, around 500 million sperms are released out of which many die on their way to the fallopian tube and only one reaches the egg. The fallopian tube carries the eggs or ovum that a woman releases during ovulation. The sperm fertilises the ovum and the process of conception begins.

Apart from child’s sex, the colour of its hair, skin and eyes and factors that influence its body build and height are determined during fertilisation.

Implantation: After fertilisation, the cells of zygote (fertilised egg) multiply rapidly to form a ball of cells known as blastocyst or embryo. This blastocyst travels from the fallopian tube to the uterus wall to get attached to it. This is called implantation. The implanted blastocyst develops three germ layers, the endoderm, the ectoderm and the mesoderm. At this point of time, the embryo is about 0.1 mm in diameter and has characteristics from both the parents. Thus, it is genetically a distinct individual. The formation of blastocyst takes around ten to fourteen days after fertilisation.


If fertilisation of the egg doesn’t take place, the lining of the uterus which is prepared for the implantation of the embryo breaks away to come out of the woman’s body during her monthly menstrual cycle. If, however, the embryo has been implanted successfully, it sends out a hormonal signal to stop the occurrence of mother’s next menstrual cycle. The absence of this period is often considered as the initial sign of pregnancy.


Estimation of Pregnancy Weeks : Generally, a woman takes the first pregnancy test when she misses her menstrual period. It is only then that she comes to know about her pregnancy. Gynaecologists and obstetricians, however, consider the woman’s last day of last menstrual cycle to be the date of conception. From the date of conception, it is considered to be a 40-week pregnancy. This helps to determine the foetus’s gestational age. Full-term pregnancy is considered to be 38 weeks long from the day of fertilisation or conception and 40 weeks long from the day of the mother’s last day of menstrual cycle.

Development of the embryo: After implantation, the embryo develops around itself a fluid-filled capsule to prevent any external and internal injuries harming it. The placenta develops just after the embryo has implanted itself on uterine wall. The placenta transfers nutrients and oxygen from the mother’s bloodstream to her baby and helps the baby in the removal of waste products from its body. The umbilical cord connects the embryo to the placenta. By the last week of the first month of pregnancy, gestational sac appears and it grows by 1mm every day until the ninth week of pregnancy. The baby’s internal organs such as kidneys, liver and heart begin to form by the end of the first month.

If the gestational sac doesn’t appear in the last week of the first month, it becomes visible in the initial days of the second month. The embryo is approximately 2mm long and its spinal cord and brain start to develop. By the third week of this month, the facial features, dental buds and the limbs of the embryo start forming. At the end of the second month, cartilage skeleton starts turning into bones. Now, the baby can be referred to as foetus.

As the third month begins, the baby’s length increases to 90mm and it weighs around 45-50g. The face of the foetus, the formation of hands and legs on its body are clearly visible and its eyes remain closed until the tenth week. The baby starts making slight movements in the uterus though the mother cannot feel them. It can bend its fingers and curl its toes. By the end of this month, the foetus can open its mouth in response to the pressure applied on its palms. It starts swallowing the amniotic fluid surrounding it and passes it through the urine.

Fourth Month
By this time, the pregnancy becomes visible as the baby’s length starts increasing (it measures 140 mm from head to hips and weighs around 200g). Its heart now pumps 30 litres of blood every day. Many scientific studies on the development of unborn baby have shown that a foetus starts listening to internal as well as external sounds as early as four months. According to the authors of a book which is used by prestigious medical schools worldwide, “The ears of the foetus function as early as the fourth month, and there is evidence that it hears a good deal. One might object that if a person dives under water and someone else talks to him he hears only a muffled sound. This is true. The sound is muffled by the cushion of air remaining in the auditory canal outside the ear drum. But the foetus living in the amniotic fluid has no muffling air cushions around its ear drum - and water conducts sound better than air does. The silent world of the foetus (or, below the surface of the ocean) is a fantasy, unfounded in reality."

Fifth Month
By the fifth month, you are halfway through pregnancy. By this stage, your baby starts to develop its finger prints. Its permanent teeth buds begin to form. If it is a baby girl, her primitive eggs will begin to develop in her ovaries. It is in the fifth month that a doctor can clearly see baby’s gender. As soon as your pregnancy completes 20 weeks, the baby’s movements in the womb become apparent as it responses to external and internal sounds. The fine hair called lanugo and vernix start to develop on its skin. The foetus weighs around 283 g in the fifth month and measures around 9-10 inches.

Sixth Month
The lanugos get darker in colour and the baby’s eye brows start forming now. As your baby can freely move around in the amniotic fluid in your womb, it may change its position. In the sixth month, the foetus starts developing brown fat and its weight increases to 550-600 g and grows by 1-2 inches.

Seventh Month
Baby’s size has surely increased by now decreasing the room to move around in the womb. During this time, you will experience wild kicks of your little one. It can sense dark and light from inside the womb. To see how your foetus reacts to light, shine a torch for a few seconds at your abdomen. In the seventh month, the foetus can listen to your heartbeat, your digestive system and even your voice. A study conducted by Anthony DeCasper at the University of South Carolina showed that those infants whose mothers talk to them during pregnancy; easily recognise their mothers’ voices after birth. So, do not miss the opportunity to bond with your baby even before its birth. At this stage, the baby weighs around 1 kg and has good chances of survival if born prematurely.

Eighth Month
Now, the foetus is getting ready for its birth. Its body’s entire red blood cell production has been completed by its bone marrow. The amniotic fluid is still present around your baby and it urinates into it regularly. The foetus opens and closes its eyes as a response to light. By this time, the foetus has developed fine hair on its head, though it can also be bald. The foetus at this time would weigh around two kilograms and would measure around 14-16 inches.

Ninth Month
The baby’s organs have developed completely, but its weight which was increasing rapidly until the 37th week slows drastically. You may expect your delivery at least two weeks before the due date your doctor has given you. When the baby is completely ready to come outside, it will give you signals and you will experience intense labour pain. According to National Health Service (NHS), UK, “The main signs of labour starting are strong, regular contractions, and a ‘show’ – when the plug of mucus sealing your cervix comes away. Other signs that you are going into labour can include your waters breaking, backache, vomiting or nausea, diarrhoea, and an urge to go to the toilet caused by your baby’s head pressing in your bowel.”

Though the process of conception to birth is long and can be tumultuous for the expectant mother, holding your adorable baby close to your heart after the long wait of nine months will make you forget all the pain and trouble you went through.