Not just women but men get affected by pimples too. Shying away from the fact doesn't help. Taking care does. Read on for tips to prevent pimples in men.

Contrary to popular belief, pimples and acne are not just a teenage problem. Nor are they an exclusive female problem in adults. 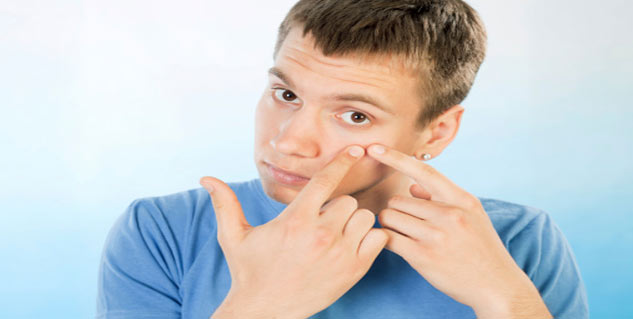 So, let’s just square up, be men and admit it. Men can have severe pimple trouble too. And they don’t like it either. It’s all very well for people to say “that’s such a girl thing!” when a guy admits his acne problems, but the truth is that over 25% adult men suffer from severe pimples and acne. But never fear. Help is at hand!

Pimples are essentially a disorder of the skin caused by hormones. Basically, a high level of androgens stimulates the sebaceous glands to produce more oil than necessary, resulting in a swelling of the skin gland, or a pimple.

The problem in most cases is of oily skin. The best remedy for that is to wash your face often with a mild cleanser. While washing your face, avoid rubbing or scrubbing too hard. This can result in peeled off or dry and irritated skin. This, in turn, can make pimples worse, aside from the itching that is bound to follow. Simply work the cleanser or face wash into your skin with the lower half of your fingers lightly taking care not to rub too hard on the pimples and wash off with an ample amount of water. Ensure that the cleanser is completely washed off. Any residual chemical can worsen the situation and cause rashes.

This may sound like an old wives tale, but one of the best ways to reduce pimples is to drink water. Water helps cleanse tissues on the inside and clears up the skin on the outside. 8 – 10 glasses of water is an absolute must but if you can stretch it to 10 – 12, nothing like it!

Get rid of toxins

The more toxins you flush out of your body, the better your skin becomes. Another common reason for pimples is products that contain harsh chemicals that don’t agree with your skin like hair gels. Check if the hair styling gel you use is certified to be non-comedogenic. A non-comedogenic product is one that does not provoke the formation and growth of blemishes and other related skin disorders.

Be careful while shaving

The use of a too-strong shaving cream or gel or a bad blade can worsen zits, if not nick them as well. Shaving itself does not cause zits but has been known to worsen the situation for several men. But that doesn’t mean we’re asking you to ditch the smooth look. By all means, shave, but pick your products with care.

Another mistake several people make while dealing with zits and pimples is to pop them. Never – and we will repeat this for emphasis – never, ever pop a pimple. It not only increases your chances of leaving an ugly pimple scar on your face, but also helps spread the problem.

Another ‘never’ in the list is: Never touch your pimples with your hands and fingers. The skin on your fingers contains natural oils which will only make the oily problem on your face worse!

Since the skin of men is different from that of women, women’s anti-pimple creams may not always work for men. But there are several pimple removal creams for men in the market as well. But it is best not to rely on them too much, because they may be too harsh and may end up worsening the situation.

The best thing to do is to eliminate the reasons why the zits pop out in the first place. And nothing works like water – drinking it, and washing with it!