How does Diabetes Cause Blindness

How does Diabetes Cause Blindness: The high levels of sugar in the blood cause damage to the retina and lens, thereby, affecting vision completely or partially. 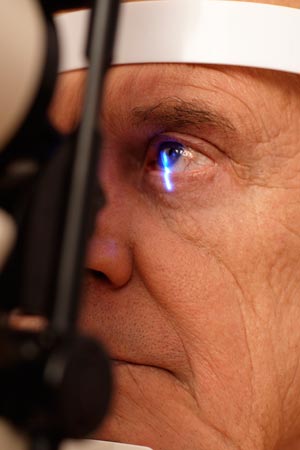 One of the major symptoms of diabetes is the blurring of the image that is  experienced by the diabetics. The high level of sugar in the blood  may result in two conditions—diabetic retinopathy (blocked retina) and cataract (cloudy lens), both of which can cause permanent blindness.  Over time, both these conditions get worse, thus hampering complete vision.

[Read: Why do Diabetics have Blurred Vision?]

Diabetic Retinopathy: Increased blood sugar  trigger higher levels of free radicals, thus making all the arteries in the body, including retina, susceptible to damage. Free radicals in the body increase the stickiness of the arterial linings and lead to fat deposits in the arteries due to which they get blocked and swelled. New weaker vessels develop after the old ones are blocked. These underdeveloped vessels lead to fluid leakage in the vitreous, making it difficult for light to enter the retina.  The resultant injury may cause retina to contract or detach from the wall of the eyeball, further affecting the vision and streamlining the chances of recovery.

Cataract: This is another insidious complication of diabetes. High levels of blood sugar alter the chemical makeup of the lens molecules, resulting in development of whitish, cloudy and hazy look on the lens of the eye. This is called cataract. The lens becomes opaque and  light does not pass through it, resulting in  blurry vision. The more your lenses become opaque, the more it affects the vision.  Subsequently, there is a complete loss of vision to the affected eye.

Glaucoma:  High blood sugar in diabetes can lead to the development of earlier stages of glaucoma, according to a finding by the American Diabetic Association. In glaucoma the optic nerve, which is responsible for carrying visual messages to brain gets damaged. It is due to the increased pressure on the fluids present in the eye ball.

Stroke has also been seen as a potential cause of  blindness in diabetics. During the course of stroke, there is loss of blood supply to the affected areas  of the brain due to which they stop functioning. If the stroke affects the visual cortex, it may cause blindness.

To safeguard your vision against blindness caused by diabetes, it is important to control your blood sugar level, blood pressure and cholesterol. One must also visit an ophthalmologist regularly.