Grateful Teens are More Likely to be Happy

Happiness and hopefulness in teens linked with gratitude. 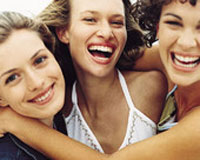 Grateful teenagers have significantly higher chances of being happy, contended and well-behaved individuals at school than those who are not, according to a study presented by the researchers/professors at California State University. The findings of the study were presented at the American Psychological Association’s annual meeting.

Giacomo Bono, one of the researchers in the study, said that the society needs more gratitude and contentment among adolescents to raise a generation that will be capable of introducing impactful changes all over the world. ‘Gratitude’ in teenagers was defined by the researchers as a positive outlook towards life and their future.

The researchers employed 700 children aged between 10 to 14 years to conduct the study.  The kids were evaluated for the next four years and it was concluded that the most grateful children were 15 per cent more motivated to achieve something in their life and were most satisfied with their lives. Researchers noted 17 per cent boost in hopefulness along with 15 per cent fall in chances of depression and stress.

Grateful teenagers have higher chances of being happy‘Gratitude’ in Teenagers