Ageing is a constant worry not only among those on the brim of it but also the youngsters. But, it turns out that ageing can be treated and not with innumberable botoxes or anti-ageing creams but by eating less of what you eat now. 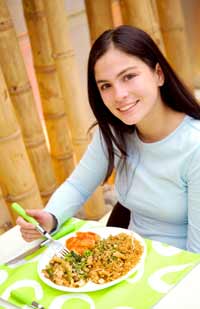 Scientists are working on a treatment for ageing. They aim to do so by basing their treatment to be developed on the genetic properties of fruit flies, which are 60 per cent similar to the human genes. The research is being carried out by Institute of Health Ageing at University College London. They want to identify the lifestyle and genetic factors, especially pertaining to diet, on the basis of which the new anti-ageing treatment would be developed.

According to Dr Matthew Piper, one of the important team members working for the research, if the genes related to ageing can be identified, the very process of ageing can be delayed. The scientists are confident of developing the treatment for humans, as the experiments involving modified diets and drug treatments for prolonging the lifespan of flies and mice have been successful.

Despite the success in animal trials, Dr Piper has warned that the 10 year old research is at its initial theoretical stage, and that they are still not clear about the time needed for the treatment to be tried on humans. The only successful conclusion which can be tried by humans is living more by eating less. Mice whose diet was reduced by 40 per cent were found to have a 20-30 per cent longer lifespan. So, by diet management, even humans can extend their life.

MORE FOR YOU
Worried About Winter Weight Gain? Here Are 5 Weight Loss Foods to Have During Winter
Finding It Difficult To Lose Weight? Get Yourself Checked For These Diseases, Conditions
Don't Throw Away Those Tea Bags: Use Them For Skin & Hair Care Benefits
Follow These 5 Important Tips To Prevent Bladder Cancer
Passive Smoking: Its Impact, Who Is At Risk & How To Protect Yourself
Here Are 5 Types Of Soup Diets You Need To Know About

Drink 2 Cups of Tea for a Baby