Difference between Anna’s and Gandhi’s fast

For Mahatma Gandhi a fast was a ritual; a ceremony which involved the cleansing of the inner body and soul before any other result. It was a method of introspection where an individual had to look beneath the layers of self importance and self 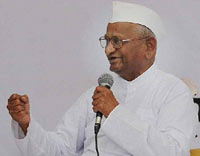 When Bharat decide to voice his protest against Ram’s decision he decided to go on a hunger strike. When Mahatma Gandhi wanted the nation to understand that communal killings are not only evil but are also an alarming indication of the nation’s ill will as a whole, he decided to fast unto death. And now, when corruption has harassed, taunted, insulted and antagonised every Indian, Kishan baburao Hazare, otherwise known as Anna Hazare has decided to protest, fast, coerce and make the government realise the efficacy of the Jan Lokpal Bill.

Between the brouhaha about Anna, his resilience, his now world famous fast and constant comparisons with Gandhi; it is important to understand what is actually similar and different between Anna’s fast and Gandhi’s fast. Many detractors will ask why make the distinction and does it hold any water in the current context. However, one look at the flooding of our inboxes with e-mails hailing Anna as the next Gandhi and slogans such as ‘Andhi hai bhai andhi hai, Anna doosra Gandhi hai’, will tell you why we need to differentiate.

For Mahatma Gandhi a fast was a ritual; a ceremony which involved the cleansing of the inner body and soul before any other result. It was a method of introspection where an individual had to look beneath the layers of self importance and self righteousness and find the truth. Before anything else, a fast, according to Gandhi was to be undertaken to purify one’s self and hope that the message spread through the masses. He said, “Fasts could not be undertaken out of anger. Anger was a short madness”. He also said that, “Hunger – strike has become such a nuisance that it will be as well for the committee to adopt measures to check it before it assumes dangerous proportions.” Gandhi justified his own reasons for fasting in order to coerce the British government into giving in. At that point in time Indians had no say in the laws that were implemented by the Raj for matters of governance. They couldn’t repeal any law they did not agree to. Civil disobedience was justified because it sought to bring to the table the plight of voiceless India. However, even Gandhi’s method of fasting to prove something right has been castigated. Dr. Ambedkar, while introducing the Constitution in the Parliament was of the opinion that post independence coercive methods such as Satyagraha and hunger strikes have become unconstitutional and need to be abandoned. He even called them, “The grammar of anarchy”.

Now let’s take a look at Anna Hazare’s reasons for fasting unto death. Yes it is true that as a nation we are up to our necks in corruption. Yes it is true that corrupt officials, babus and netas make everyday life a struggle for the common man. Yes it is true that corruption has caused humungous losses not only to the citizens but to the exchequer as well. There is a need to quell corruption. But isn’t forcing one’s opinion on the government and publicly threatening the government with dire consequences if the demands are not met, lawless acts in themselves? This question needs to be answered. As for the debate whether Anna’s fast unto death should be allowed or not, it has two sides. One side is of the opinion is that yes, if a citizen demands something he has every right to protest for it. The other is of the opinion that if a citizen is threatening to kill himself by using subtle measures such as fasting, then the state has every right to stop the act when it is especially true for a nation where suicide is considered a crime.

Before I end, let’s review one final comment by Tushar Gandhi who is Bapu’s great grandson. He says that, “If Bapu were here, he would have asked people to first do some introspection, acknowledge their own shortcomings, and overcome them. He would have appealed to people to 'be the change', as goes his saying”. Is this a hint at the fact that we as a people have fanned corruption to its present status and it will refuse to die down unless we change? I am still wondering. I hope it invokes some thought in you too. It’s like a friend once thought out aloud; are you fasting with Anna or for Anna eh?

Note: Tushar Gandhi’s quote as been used from an article that appeared in Midday on August 17, 2011.