Diabetes mellitus and hormone imbalance: Type 1 diabetes is an autoimmune disease, which is characterised by hormonal imbalance and failure of immune system to regulate blood sugar levels. 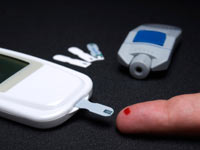 Hormonal imbalance in a person influences the blood sugar levels, which is associated with diabetes mellitus. Hormones are responsible for the movement of glucose from the bloodstream and into the cells. Sometimes, this imbalance of hormones leads to abnormally high levels of glucose in the blood causing diabetes. In diabetes, individuals experience unintended weight loss, nerve damage and excessive thirst. Moreover, risk of ailments such as heart attack, kidney failure and stroke increases by many-folds when a person is diagnosed with diabetes.

Hormones are the regulators of several body activities and mechanisms such as electrolyte balance, blood levels of glucose, heart rate and metabolism. These are produced by hormone-secreting organs and get spread in the entire bogy through the bloodstream. Hormonal secretion and utilisation has an impact on the processes such as immune responses, blood pressure and glucose production.

Usually, a hormone called insulin is ascribed as the cause of diabetes but the disease can be affected by other hormones as well. Hormonal imbalance of the following hormones may have diabetic implications:

Insulin secretion leads to diabetes when it is used inefficiently in the body. The hormone is produced by the islets of Langerhans in the pancreas. It is during the digestion process  that food gets converted into glucose and is sent to the bloodstream. Glucose, which is responsible for powering cells with energy remains in the bloodstream in high quantities.

Cortisol is another hormone that is responsible for regulation of blood pressure. It helps the body to deal with stress situations or recovery from surgery or illness by regulation of glucose production. Cortisol in excessive quantity, however, inhibits insulin and stimulates liver to produce more glucose, which leads to diabetes. Cushing's syndrome is another health condition related to adrenal glands producing cortisol in abnormal quantity.

Growth hormone, which is produced by the pituitary gland, is responsible for streamlining body functions such as the development of body organs, bones and muscles. Excessive production of growth hormones may lead to acromegaly, which is attributed to thickening and deformation of the bones. Diabetes is counted among the consequences of acromegaly as the condition may increase blood glucose levels by inhibiting movement of glucose into the cells.

Infections, tumours, autoimmune reactions, dysfunctions and nutritional deficiencies can lead to hormonal imbalance. These should be treated so that growth, development and reproduction processes of the body don’t get affected. Hormonal imbalances can be treated by synthetic hormone replacement, radiation therapy and surgery.